By David Anson, Head of English

As ever, the annual Block 3 and 6.2 Poet’s Stone walk on Saturday 4 May was an invigorating and stimulating occasion. So good to see the two year groups displaying all that is good about the cross year group friendships that are possible at Bedales.

After the brisk trek up the Shoulder of Mutton we had a breakfast of fruit and pastries with a side of some Edward Thomas poetry; 6.2 students Sam Vernor-Miles and Meg Allin read rather beautifully The Penny Whistle and Tall Nettles, I read The Combe and one of our librarians, Ian Douglas, read The Lofty Sky.

It seems such a lot to achieve before 8.30am but definitely set us all up for a welcome bank holiday long leave before the more serious business of A Level exams begin.

To-day I want the sky,
The tops of the high hills,
Above the last man’s house,
His hedges, and his cows,
Where, if I will, I look
Down even on sheep and rook,
And of all things that move
See buzzards only above:-
Past all trees, past furze
And thorn, where nought deters
The desire of the eye
For sky, nothing but sky.
I sicken of the woods
And all the multitudes
Of hedge-trees. They are no more
Than weeds upon this floor
Of the river of air
Leagues deep, leagues wide, where
I am like a fish that lives
In weeds and mud and gives
What’s above him no thought.
I might be a tench for aught
That I can do to-day
Down on the wealden clay.
Even the tench has days
When he floats up and plays
Among the lily leaves
And sees the sky, or grieves
Not if he nothing sees:
While I, I know that trees
Under that lofty sky
Are weeds, fields mud, and I
Would arise and go far
To where the lilies are. 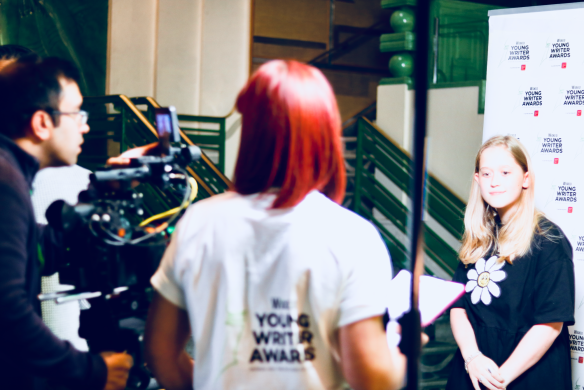 Congratulations to Block 3 student Freya Hannan-Mills, who has been crowned winner of the 11-14 Years Category in the esteemed Wicked Young Writer Awards 2018.

Freya’s short story, Mushy Peas and Battered Bits – which was chosen as the winning entry by a panel including bestselling children’s author Michael Morpurgo, How to Train Your Dragon author Cressida Cowell, Olivier Award winning theatre producer Michael McCabe, and Young People’s Laureate for London Caleb Femi – staved off competition from 19 other finalists.

As winner of her category Freya won four tickets to see the London production of Wicked at the Apollo Victoria Theatre, a meet and greet with the cast members and an exclusive backstage tour, as well as £50 worth of books tokens, an annual subscription to award-winning children’s newspaper First News, and £100 worth of books for Bedales’ school library donated by Hachette Children’s Books.

Now in its eighth year, the Wicked Young Writer Awards recognises excellence in writing, encourages creativity, and helps develop writing talent in young people aged between five and 25 years old from all backgrounds and areas of the UK.

Freya said: “It was a fantastic honour to win the Wicked Young Writer Award. I felt shocked and excited to have won. A highlight of the ceremony was Alice Fern, who plays Elphaba in Wicked, reading my story.”

She added: “Since being at Bedales I really feel as though my creative writing has matured and developed – I have had enormous support, encouragement and the opportunity to attend masterclasses and mentoring sessions.”

Freya, who last year appeared on stage at the Lyric Theatre, London, in the production Snow Angels which she also wrote, is currently working on another script which is due to be filmed this summer.

Freya has kindly donated a copy of the book containing her winning entry, along with the other finalists’ entries, to Bedales’ school library.